What is a Hybrid Gain Flattening Filter (GFF)?

The rapid expansion of the World Wide Web and increased connectivity requirements have generated an explosion in optical communication systems. In optical fiber-based communications, optical signals are transported on a light wave. Each wavelength (or frequency) of light transmits a separate data channel.

Over long distances, erbium-doped fiber amplifiers (EDFAs) amplify these signals to ensure reliable transmission of information. EDFAs operate over a 1527 nm to 1563 nm optical wavelength range. Within this range, separate wavelengths may be transmitted and amplified. Since the gains of EDFAs are not constant over their range of operation, adjacent frequencies of light vary significantly in their intensity as they undergo multiple stages of amplification.

One solution is to couple an EDFA with a device that possesses an EDFA’s inverse characteristics. Such a device flattens the EDFA’s output gains across the wavelength band. A gain flattening filter is such a device.

How is a Gain Flattening Filter Used?

Erbium-doped fiber amplifier (EDFA) modules are used in optical communication systems to amplify signals over a given distance. They replace electronic amplification modules, which convert optical signals into electrical signals, and back again. 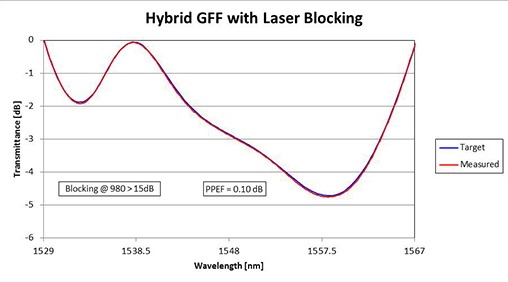 While a gain flattening filter is used to flatten the signal at the output of an EDFA, a wavelength division multiplexer (WDM) module – which blocks wavelengths at 980 nm or 1480 nm and transmits the signal bands (the 1520nm to 1570nm “C-band” of 1570nm to 1620nm “L-band”) – is also needed to minimize interference or noise from the pump laser. In such a system design, a GFF operates in conjunction with a WDM.

The quality of a gain flattening filter is described by the peak-to-peak error function (PPEF). This measures how close the transmittance of a GFF is to the desired target curve. Factors determining the minimum PPEF achievable are the maximum slope and the smoothness of the target curve. Some applications may require multiple flattening regions, thus increasing the complexity of the GFF.

What is a Hybrid Gain Flattening Filter?

Iridian Spectral Technologies developed a Hybrid GFF that combines the functionalities of a GFF and WDM into a single component. In other words, a Hybrid GFF minimizes interference from the laser while flattening gain over the wavelength band. Such a device can also pass or block other wavelengths in the 900 nm to 1700 nm band.

It is worth noting that GFF/WDM designs are challenging. Combining them into one component is a significant advantage to system designers as it reduces cost, size (or footprint), and an overall loss in the system. Further, there is no degradation in single-band or multi-band performance. Eliminating the WDM enables modules that are compact and cost-effective.

The greater the variation in gains that need to be compensated, the more difficult it is to meet a customer’s desired PPEF. Iridian is known to produce GFFs with extremely low PPEF. It has engineered its Hybrid GFFs with the same industry-leading capability. There is no compromise in performance when upgrading from a base GFF to a Hybrid GFF.