Optical filters are used in many applications and the surface figure and wavefront distortion requirements of filters are dependent on where and how they are used. Whereas band-pass or clean-up functionality may only require control of the transmitted wavefront, dichroic beam-steering/splitting filters or wavelength selective mirrors likely require specification of both the transmitted and reflected beams. If filters are only used in sensing applications with very tolerant detector geometries, there may be no need, in practice, to put any constraints on the surface figure or wavefront distortion. It is important to understand where, when, how, and how much to specify wavefront distortion to ensure that functional requirements are guaranteed while unnecessary and costly constraints are avoided.

Surface figure encompasses the specification of the geometry of the two optical surfaces of filters with respect to each other and the resultant physical effect on the transmitted or reflected light. Flatness is a subset of surface figure specifying the geometry of a single surface not a two sided filter. Flatness is often employed as a default catch-all parameter, used when a customer is unsure of the wavefront control requirements of a filter but knows (or at least believes) that it is necessary to specify something to avoid getting a highly curved optic that might distort the light path. The flatness of a surface is the maximum deviation from a perfectly flat surface of the same lateral dimensions specified in nm of deviation or sometimes as a “per/λ” value ratio of the nominal wavelength used to characterize surface figure (typically 633nm). As such, this specification is influenced exclusively by geometric surface deviations of the filter. While this spec only defines a single surface there is often only a single flatness filter spec provided, implying the same flatness value must be achieved on both the first and second optical surface of the filter in question.

Flatness is commonly misused as it is purely a physical parameter of a surface and is not wholly responsible for what really matters functionally; the maintenance of the quality of the wavefront and direction of the incident beam and its transmitted and reflected components. Optical filters will often include specifications for any or all of flatness, transmitted wavefront distortion or error (TWD/TWE), and reflected wavefront distortion or error (RWD/RWE), defined over the clear aperture of the filter or per unit of lateral dimension (e.g. per inch). In practice, specifying TWD and/or RWD should suffice; flatness is not required as a filter spec but may be used to specify the uncoated substrates.

Transmitted wavefront distortion (TWD), or equivalently transmitted wavefront error (TWE), is a specification that describes deviation from a perfectly flat plane wave of the transmitted component of incident light. TWD is typically specified as a “per/λ” value ratio of the nominal wavelength used to characterize surface figure (typically 633nm). TWD is important particularly in imaging applications as distortion of the transmitted beam can result in distorted images at the detector or variations in light intensity at the detector not resulting from the sample under test but rather a consequence of the influence of the filter itself.

TWD is primarily influenced by the characteristics of the bare substrate prior to coating. Substrate parallelism specs largely define TWD but inhomogeneity in the substrate material can also affect the transmitted wavefront due to variations in effective optical index induced by the material properties. Similarly effects from variations in coating uniformity can impact TWD, although the effects of both the coating and substrate inhomogeneity on TWD are almost always swamped by the physical substrate specs.

Like TWD, RWD is influenced by the characteristics of the bare substrate prior to coating but, unlike TWD, the effect of coating stress often makes a very important contribution to RWD. Flatness of the primary reflective surface largely defines RWD so the flatness of the incident surface of the substrate matters but, due to the stresses induced by complex coatings, the curvature of this surface is invariably altered by the coating itself. A perfectly flat substrate surface may be curved (convex) by the filter coating but can be flattened, at least partially, with an equivalently stressed backside coating (stress-balancing coating). Inhomogeneity in the substrate material is largely irrelevant as the reflected beam does not reach the substrate material itself but variations in coating uniformity can impact RWD.

The following figures illustrate different physical parameters such as individual surface flatness/curvature and substrate inhomogeneity and the resultant relative effects on TWD and RWD.

Side A: flat; Side B: flat; Substrate: homogeneous 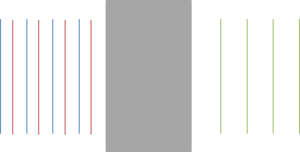 Side A: curved; Side B: curved (same as side A); Substrate: homogeneous

Side A: curved; Side B: different than side A; Substrate: homogeneous 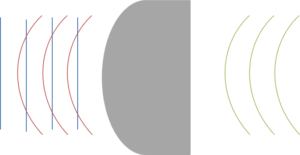 Side A: flat; Side B: flat; Substrate: inhomogeneous 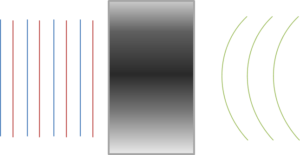 What to specify and when: cost and complexity implications?

While it may be tempting to specify all of flatness, TWD, and RWD as part of a complete filter specification, it is important to ensure that functionally irrelevant parameters are not specified as this can unnecessarily drive complexity and cost of filter builds.

TWD specs largely drive substrate parallelism and homogeneity specs so are tied to the sourced material costs; from the perspective of the optical filter manufacturers these specs gets passed along to substrate manufacturers and the resultant costs to the requesting customer.

On the other hand, RWD specs influence both the raw substrate costs (specified as flatness requirements for the uncoated substrates) and, perhaps more significantly, the filter coating run times, yields, and costs due to the requirements to control, understand, and compensate for the curvature induced by the filter coating through stress balancing coatings often as thick as the primary coating. Additionally the added stress balancing coating can have a negative effect on other filter specs such as surface quality due to additional handling and longer coating times potentially generating more defects.

Here are a few guidelines for when to specify TWD and/or RWD: