The core telecommunication range generally starts around 1250 or 1260 nm and reaches between 1650 and 1675 nm, across which numerous single band pass filters may be applied. Specifically, ITU standard CWDM band pass filters pass a 15 nm range and reject 25 nm outside. ITU standards for CWDM stipulate a channel spacing of 20 nm each, meaning a designer can start with a central wavelength of 1270 nm and progress to 1290, 1310, 1330, and so on.

In 2008, Iridian and a communications system designer in the South Korean market first considered and integrated two band pass filters on a single filter chip. Now, for example, one filter chip could permit pass bands where one filter’s central wavelength is 1310 nm and another filter’s central wavelength is 1490 nm (in lieu of using two single band pass filters with the same central wavelengths). This capability has revolutionized WDM and PON module and system design by simplifying connections, conserving space within the module, and eliminating costs associated with sourcing and implementing numerous single band filters.

Iridian and its Korean partner had recognized the market need for such a component; the communications system designer needed technologies to enable and improve LTE (long-term evolution, also sometimes referred to as “4G”) wireless transmission. Fast-forward to today, and market need for multi band pass filters is driven by the technology demands of fifth-generation (5G) wireless transmission (from the mid-wave band to the mmWave band), shrinking consumer devices, and increased connectivity in numerous technologies, including military, consumer, and medical devices.

The most popular application for multi band filters currently is wireless station interconnects for 4G, LTE, and 5G systems. Multi band filters also can be used in any CWDM system where minimizing component count and reducing component footprint is an advantage (i.e., GPON, XG-PON, XGS-PON, which leverage three specific wavelength channels: 1310, 1490, and 1550).

Band pass filters do not have stand-alone functionality; they must be packaged (the result being a component). Within the component are the filter itself, two collimating lenses, and a fiber lead out. Using two or more single band pass filters within a module, a designer must individually connect each fiber-connected component to one another.

Alternatively, a dual band fiber filter saves the designer at least one fiber connection, while a triple band filter combines three distinct filters into one component and saves at least two fiber connections. The advantage for the designers is a reduction in the overall footprint for the equipment “closets” used to install wireless interconnect stations, which becomes more critical as the number of stations increases in 5G networks and the cost of the urban real estate (needed for these closets) soars.

The maximum density possible (i.e., maximum number of filters packaged/bands feasible in one component) depends on customer specification. While Iridian has achieved as many as nine bands within the range between 1240 nm and 1650 nm, dual or triple band filters are more typical in the telecommunications wavelength range.

Further, additional bands do not encourage any performance degradation; on the contrary, multi band pass filters are capable of producing a flat pass band and good reflectance isolation in almost all use cases. However, channel spacing must remain reasonable and dead bands must not be too “steep.” For example, while 20 nm is an achievable band space, 50 or 60 nm between adjacent pass bands is preferable. Otherwise, the filter skews closer to a narrow notch filter.

Ultimately, system design is simplified, and system performance is improved, by using multi band pass filters. The designer reduces the number of components within the module, optimizing use of space/dimensions. Design is simplified by removing the number of fiber connections necessary, and removing these extraneous connections reduces insertion loss.

Despite these advantages, the expense of using multiple single band pass filters versus single multi band pass filters does not scale linearly with the number of bands. The principal deciding factor in cost scaling is steepness of the dead band, which determines design thickness and establishes how difficult (i.e., expensive) the design is to construct. Simply put, a design with 5 nm dead bands is going to be more expensive than something with 10 nm dead bands. 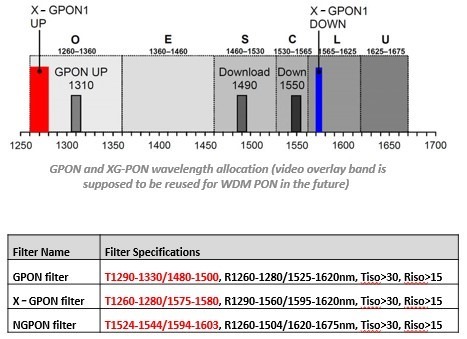 Assuming specification requirements are similar (.g., the isolation and dead band), the total cost for a single band filter and a dual band filter are comparable. On average, a multi band pass filter will be priced about 20 percent more than its single band counterpart, despite doubling the single component’s capability and improving both performance and fit. Note, though, that this equation is general and can vary by customer application and specifications.

Iridian broke ground in the use of multi band technology in telecom applications and was its only supplier in 2008. While other vendors have followed suit in offering dual band filters, Iridian stands out as a preferred partner. To wit, most vendors can handle dual band filters with typical ranges (1310, 1490, 1270, 1570), but struggle with difficult specifications, such as 1534 nm and 1600 nm.

Iridian’s experience designing in other areas carries over into designing dual band filters, a result of the company’s diverse range of capabilities, allowing us to produce components to the most difficult specifications. Indeed, the variety of specifications requested by our customers is expansive, requiring a deep knowledge base to tackle.

For example, channel spacing is a key multi band pass filter design difficulty. XG-PON (10G-PON) requires two pass bands very close to one another (e.g., 1545 and 1600 or 1610). Only Iridian can achieve consistent quality and performance in this range ensuring stable high-volume supply of these multi band pass filters (Fig. 2). 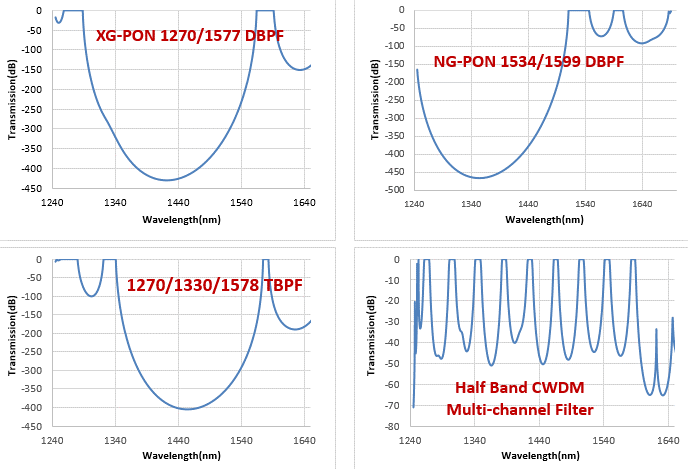 At Iridian, delivery times are the same for both single band and dual band custom components. It’s this blend of quality, agility, and capability that has made Iridian the global market sales leader in this technology.

Telecommunications is a uniquely ruthless technological environment, in that vendors and operators must cater to varying demands from private citizens, large corporations, startups, governments, and more.

Xiaolun Zeng holds a B.ENg in Automation Technology, an MSc. in Applied information and Computer Science, and more than 20 years’ experience assisting customers with a wide range of technology needs for telecommunications applications. Prior to joining Iridian in 2005, Xiaolun served as R&D and sales & marketing manager at Broadex; he also served in senior engineering, product development, and sales roles at AFOP, Santec, and JDS Uniphase. As Account Manager at Iridian, Xiaolun assists our telecom customers with optical filter solutions.

Michelle Derouin received her BASc in Electrical Engineering at Queen’s University in 2005 and is a Senior Application Engineer at Iridian Spectral Technologies with over 15 years’ experience in optical filter design. Michelle specializes in telecom filter design — Gain Flattener Filters and Dual Band Filters, in particular. Her skills and abilities in these areas have translated to a variety of product lines including 3D cinema production.