Messages From Above – Optical Satcom Lights the Way

We live in the “Communications Age” – rapid access to information and connectivity to each other, anytime, nearly everywhere.  But despite the massive strides that have been made in the past half century – from hardline telephony to the current ubiquitous wireless “smart” device connectivity – there is still further evolution to come that will necessitate extending the communications reach even further.  While we have laid down a large physical infrastructure of wireline fiber-optic networks and wireless cellular base stations, the next advances in communications, 5G and machine-to-machine communications, will require “help from above” to blanket literally every corner of our planet with high speed, ultra-low latency, secure networks – telecom meet satcom.

Internet traffic has grown by an order of magnitude over the past decade [1] and this growth is expected to continue driven largely by a massive increase in mobile internet and the internet of things (IoT) including the coming adoption of autonomous vehicles, all to be supported by high speed, high bandwidth 5G networks.  There are now 3x more devices connected to the internet than there are humans and the ratio is rapidly accelerating.  Additionally, despite the perception in the developed world that everybody is “online”, there are still ~4 billion people in the developing world without internet access and where the terrestrial fiber-optic backbone may not exist and may be impractical to deploy.  Needless to say our communications infrastructure needs to evolve, both to support the increasing use and demand for low latency services (video, machine-to-machine interactions) and to provide these services to remote and rural locations – deserts, the north, at sea, and in the air.

Satellites have been part of our communications networks since first being envisioned by Arthur C. Clarke in 1945  in an article in Wireless World [2] and then realized in 1962 by Telesat with Telstar1 [3].  While transforming the distribution of TV and some long-haul telephony, the costs and availability of satellites and launches, and the limitations (speed, security, and latency) of the communication technologies available has precluded reliance on a space based communications infrastructure.    However, recently many of these barriers have begun to disappear at the same time that the demand for such systems has risen.  Satellite launches, from both space agencies and commercial launchers, are such a regular occurrence as to no longer be newsworthy; in the first 10 months of 2019 there were 43 launches consisting of 218 unique satellites only addressing needs in communication and earth observation [4].  There are another 18 launches consisting of 300 satellites for communication and EO planned for the remainder of 2019.  Space is clearly more accessible than ever before.

Provision of internet services from space was not previously feasible as most communications satellites were deployed in geosynchronous orbits (GEO) in order to provide broad global coverage with a limited number of satellites.   Flying at more than 35000 km above the earth’s surface provides broad geographical coverage but results in a ground-to-satellite latency of hundreds of ms (theoretically no less than ~120ms).  By contrast, satellites flying in low earth orbit (LEO) at ~1000 km above the earth’s surface are expected to able to achieve a network latency of tens of ms (Telesat LEO claims 30-50ms; LeoSat claims direct ground-to-sat latency  <20ms).  The latency achievable by these LEO networks is even better than can currently be realized via terrestrial fiber networks; LeoSat compares a terrestrial fiber latency from London to Singapore of >180ms with <120ms expected to be achieved by their eventual LEO network.

In order to provide global coverage from LEO, a constellation of satellites connected in an orbital mesh network is necessary.  Depending on the coverage and mandate of the networks planned, the different network architectures range from as many as 60-100 satellites up to several thousand with SpaceX’s Starlink network proposing 11000+ individual satellites! [5][6]

While LEO systems provide obvious advantages with respect to latency and redundancy, they require a substantial satellite-to-satellite communications infrastructure to provide broad geographic coverage thus driving the large numbers of interconnected satellites that make up these constellations.  This space based infrastructure will need to be made up of hundreds to thousands of inter satellite links (ISL).  Traditional satellite communication was based on microwave or radio frequency (RF) bands, however, there are many advantages to optical “laser-based” communication links operating at frequencies of ~105 times that of RF: [7][8]

With a constellation connected by optical inter-satellite links (OISL), data can be uplinked and routed around the globe literally at the speed of light in a completely secure network before being downlinked to a terrestrial terminal at the intended final destination.

This explosion in extra-terrestrial communication constellations has created fertile ground for systems and components suppliers to provide the specialized “space-ready” hardware required.  Companies and governmental agencies with a legacy of developing and deploying satellite borne systems are taking an active role but there are also many newcomers looking to participate in this new economy.  There are conferences dedicated to addressing satcom (and optical satcom specifically) such as the International Communications Satellite Systems Conference (ICSSC)).  Recently the “Optical Satcom Consortium” (OSC) was formed bringing together Canadian companies and academia along with the National Research Council of Canada (NRC) and Satellite Canada Innovation Network (SatCan) to develop the next generation of satcom photonics to enable improved satellite-to-satellite and ground-to-satellite communications.

Among the optical components that will form important aspects of these OISL and ground-to-sat links are optical filters.  Just like their terrestrial cousins, satcom networks will function with multiple signal bands requiring wavelength selective dichroic beam combiners and splitters. 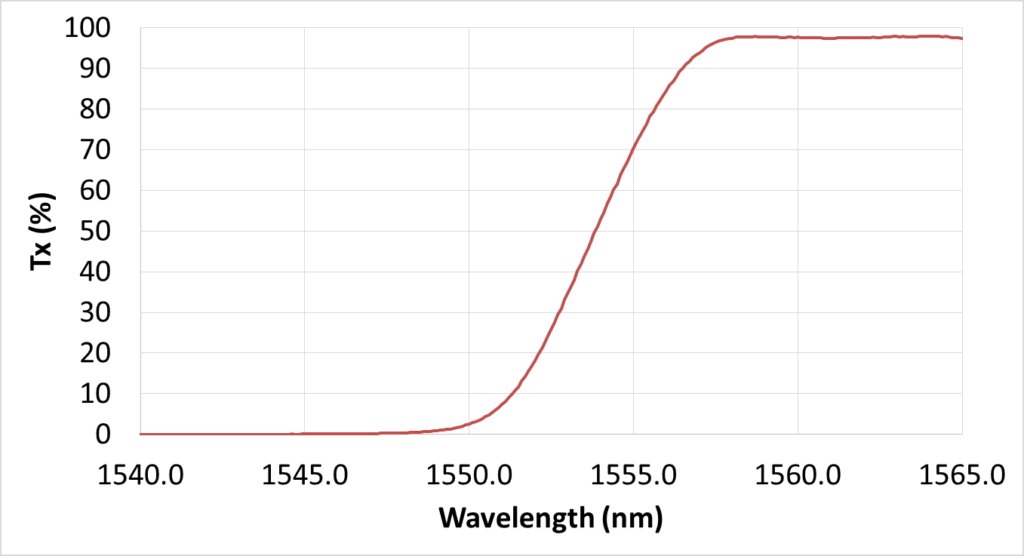 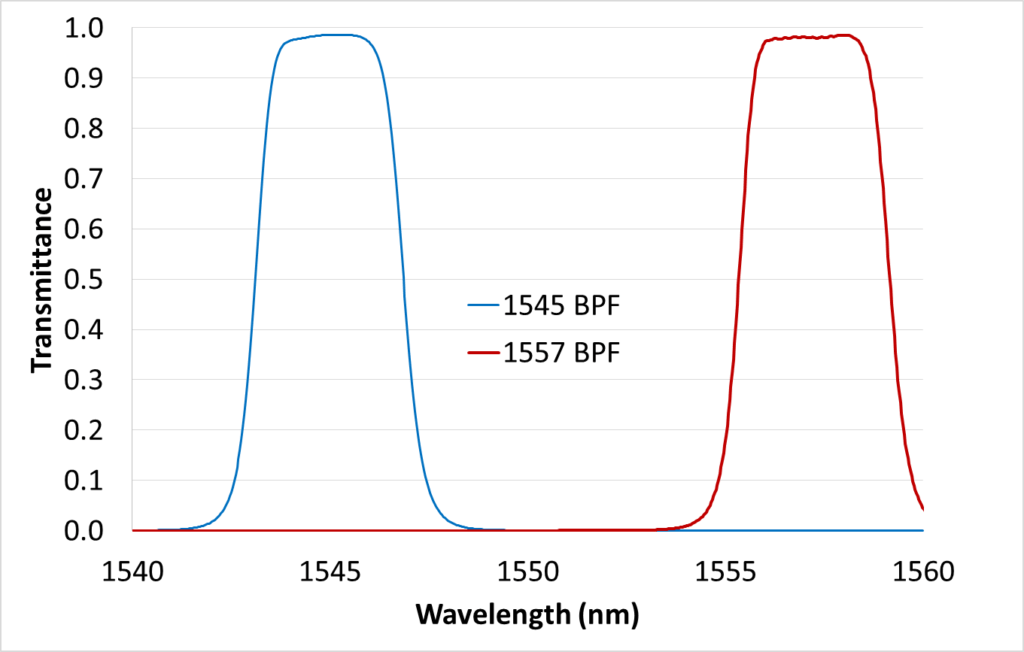 Unlike in fiber-optic networks, with satcom relatively large (one to two inch) optics are required to catch and collect the free-space beams transmitted over relatively long distances – as discussed the focused aspect of optical sat-to-sat communication makes the signal hard to intercept but equally means the receiving optics need to be large enough to be forgiving for long distance misalignment.  Additionally, solar rejection windows (SRW) are commonly used components often several inches in diameter, allowing only signal band wavelengths into the satellite to maximize signal to noise at the receiver and to keep everything inside relatively cool.

These large filters drive a need for very uniform coating performance – this is easily achieved for simple mirrors and anti-reflection coatings but is much more of a challenge for precise wavelength selective edge or band pass filters.   The uniformity is not only necessary to preserve spectral performance across the clear aperture but also to ensure coating and substrate induced contributions to transmitted wavefront distortion are minimized.  “Standard” filters specs such as ripple, transmission and rejection levels, and surface quality still need to be met for all of these large satcom filters.  Occasional unusual needs such as polarization preservation requirements associated with QKD encryption which is subtly although importantly different than polarization dependent loss (PDL – a common spec for telecom filters) may also need to be considered in filter design and manufacture . [9]

Beyond the different functional requirements, satellite based optical filters need to be designed and manufactured to withstand the demands of survival outside of the protective blanket of our atmosphere.  This includes radiation survival (solar, gamma, and proton) and large temperature swings (from sun facing to complete darkness).

Finally, none of us, including optical designers of satcom systems, know what we don’t know.  Given the historically risk averse nature of design for use in space, the demands on filter performance and demonstrated reliability are occasionally unnecessarily demanding – this “spec creep” can drive increased costs and lead-times in designing, manufacturing and testing optical filters to these “space standards”.

Iridian Spectral Technologies is actively participating in the providing optical filter solutions for these satcom systems, leveraging its more than two decades of experience developing and manufacturing optical filters for terrestrial networks combined with its recent forays providing wavelength selective optical filters for use in space based earth observation (EO) imaging.  Whether the communication signals are carried wireline on earth or satellite-to-satellite in LEO the fundamental needs of optical filters to optimize signal to noise ratios by providing wavelength selectivity are the same – just in a slightly different form.  As a result the learnings and expertise from telecom can and should inform and influence satcom optical filter builds.