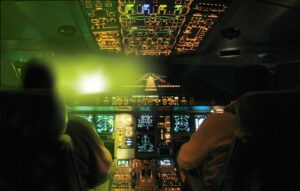 The Honourable Alice Wong, Minister of State (Seniors), on behalf of the Honourable Lisa Raitt, Minister of Transport, today launched the Government of Canada’s safety awareness campaign for lasers. The national campaign will help Canadians better understand why pointing a laser at aircraft is not a bright idea.

The first phase of the campaign, unveiled today in collaboration with the Vancouver International Airport, the RCMP, and NAV CANADA, provides the public with an easy to follow infographic, which clarifies the dangers and consequences of pointing lasers into airspace and how incidents can be reported. This summer, the second phase of the campaign will include digital advertising, awareness videos and a direct mail campaign near three major airports.

Transport Canada has also launched tc.gc.ca/NotABrightIdea, which provides Canadians with the information they need to better understand the dangers of pointing a laser at an aircraft.

Transport Canada is working closely with police, other government departments, and the aviation industry to protect pilots, passengers, and people on the ground. If you see a laser pointed at an aircraft, report it to your local police.